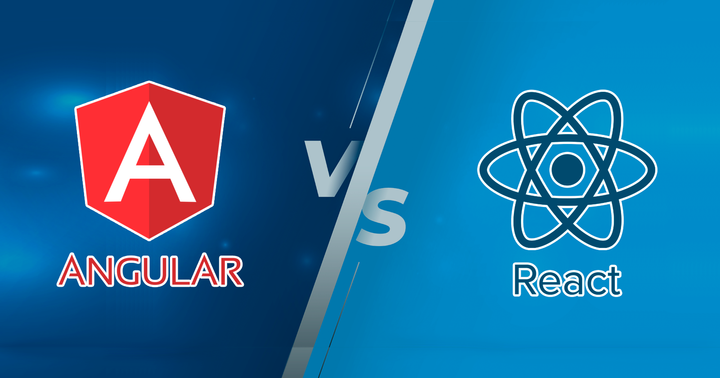 Angular vs React: let us know which is better for your application development. When it comes to selecting the right tools for developing the application, there can never be the best tools. Each has its own advantages and disadvantages.

Angular is a framework developed by Google for developing applications. It has become one of the most popular frameworks at a time and used by most developers due to its two-way data binding and dependency injection capabilities.

React is a JavaScript-based UI development library that is run by Facebook. React is a library, and it is widely used in web development. React was introduced in May 2013, and now it has become one of the most used front-end libraries for application development.

Architecture – The key difference between Angular and React is the framework and the library. Angular is a full-fledged MVC framework, while React is more like a library of UX components. Due to its minimalist design, the React framework makes it simpler to integrate your own components and libraries if you like to do things on your own. But if you are using Angular, you have to make room for the existing libraries.

Angular contains components that an application might need such as AJAX requests, routing, forms, etc. On the other hand, React has limited inbuilt features that allow developers to build those libraries themselves, as per the requirements.

Scalability – An Angular framework is highly scalable due to its powerful command-line interface and its robust design. But React is easier to test, and scaling of the application is also easier with React technology.

Frameworks – Both React and Angular have their own mobile application development frameworks. React has React Native, next.js, and react sketch app. On the other hand, Angular has ionic 2 and native script. Among all of these, React Native is the best framework for developing mobile applications in terms of ease of development and product performance.

Speed – The application built on Angular framework takes time to load on mobiles, while the app built on React technology loads faster. Speed is very important for any application. If your application loads fast, you can get more visitors and conversions.
Bundle Size – Angular does not include the entire bundle of Angular framework in the user’s application. During the development process, it gets rid of unused modules and development utilities. React, it is the use of webpack, dynamic imports, and tree shaking that reduces the bundle size.

Community – React is one of the most popular JavaScript frameworks, and it has a huge community of React experts and developers. If you are working with the React framework, you have to be a learner as the framework is often updated. React is actively used by big companies such as Facebook, Netflix, Twitter, Microsoft, and more. Angular provides long-term support for the frameworks, and it takes time to learn Angular so most developers don’t use the Angular framework for web development. The companies that used Angular are Apple, Forbes, Adobe, Nike, and more.

UI Components – Angular has an in-built material tool set, and it offers various pre-built material design components. It also includes various buttons, layouts, indicators, pop-ups, and other form controls. Because of the in-built material components, UI configuration becomes simpler and faster. On the other hand, React UI tools are developed by the community. On the React platform there are a lot of free and paid UI components. In order to use material design components in the React framework, developers have to install an additional library that is Material-UI Library and Dependencies.

Self- Sufficiency – Angular is a full-fledged framework for web and app development that does not require additional libraries. All the functions like data binding, component-based routing, form validation, dependency injection, and project generation can be implemented with the help of Angular framework. React is a framework that is used for UI Development, so applications that are built with React need additional libraries to be used. Functions such as data binding, component-based routing, project generation, or dependency injection require additional libraries or modules to be installed.

Languages – React framework is based on JavaScript ES6+ combined with JSX script. JSX is basically an extension for syntax, which makes a JS code resemble that is written in HTML. It helps to make the code easier to understand and write for the developers during the app development process. On the other hand, Angular can use both TypeScript and JavaScript languages, which is a superset of JavaScript that is developed for large scale projects. Typescript is easy to understand and use for app development.

State Management – In React Framework, each component has its own state. Through this framework, a React developer can create special components for holding the state of the entire app or a particular part of it. While in Angular, component data is stored in component properties. State changes in some parts can be identified and recalculated, but in a large application it causes a multi-directional tree series of updates, which is difficult for the developers to track. Features can be improved with the use of state management libraries such as NgRx and RxJS, which ensure that the flow of the data is unidirectional.

Let’s see some benefits of using the Angular framework for app development:

Supported by Google – Google provides long term support for using the Angular framework in development. That’s why it is used by most of the developers, and it is easy to learn and use for developing robust applications as per the requirements.

Improve Readability – Angular framework is written in TypeScript, which is a superset of JavaScript. It supports static typing of variables, classes and other interfaces. This makes the Angular framework more readable and error-free.

Declarative UI – An Angular framework uses declarative UI, this means that developers have to focus on coding the components without worrying about which one to load first. The program flow is completely controlled by Angular.

Unit Testing – In Angular components and modules are independent of each other. It makes the testing of the independent units easier and faster without worrying about the input and output of the other components.

Code Reusability – It has a component based structure that means developers can code different components of the app independently. Components can also be reused across the application.

MVC Pattern – It has an MVC pattern that eliminates the need for writing the controller codes. It decreases development time as well as ensures a faster and lighter code for application development.

Let’s see some benefits of using the React framework for app development:

Strong Community – React has a strong community that is supported by React experts. It has communities and forums where developers can post their queries and get the solutions which helps during the application development with the use of React technology.

Easy to Learn and Focused – React is not a full-fledged framework, it is a collection of libraries that are designed to render the view layer in MVC or MVVM application development architecture. Developers who are familiar with the attributes, state, and life cycles of a component can get started right away with the app development process.
Guarantees Stable Code – It uses downward data flow, this means that only the data is updated if the object is modified. This guarantees greater code stability and improved application speed.

SEO Friendly – Search engines find it difficult to process applications that are heavy in JavaScript language. But because React supports HTML, the app can be rendered in browsers as standard web pages when utilizing React. Search engine rankings and page SEO benefits from this.

Ensures Faster Rendering – React uses virtual DOM, if the changes are made in real-time. The real DOM is updated with the only difference. As a result, changes are rendered more quickly.

Angular is a full-fledged web and mobile development framework, React is a framework for UI development only, which can be used for additional features with the help of additional libraries.

The React framework seems simple at first sight, and it takes less time to start the development process. As the framework is easy to use, you have to work with additional JavaScript frameworks and tools. On the other hand, the Angular framework is more complex and takes quite some time to understand the framework and use it for web and mobile development.

Both the framework provides unique features for web and mobile development. Both are updated continuously to stay ahead of the competitor. As both the frameworks have their own disadvantages and advantages, it is better to choose the framework with the features you will choose during the development process or as per the business requirements. I hope this article helps you to understand Angular vs React. If you have any questions, please feel free to comment down below.

Which Framework is more popular: Angular or React?

Both frameworks are popular, both of them have their own advantages and disadvantages. We prefer React over Angular because of the isolated debugging, which helps developers to achieve better application stability. And React can integrate with other applications even if it is built using the Angular Framework. Now it is up to you which framework to choose for your application development as per your business requirements.

How Angular is better than React?

Angular is a full-fledged framework, it is suitable for big enterprise-wide applications.

How is React different from Angular?